Is Speech the Same as Language?

Sometimes people talk about a child's speech, when they really mean language. Although speech is an integral part of language, the words are sometimes used interchangeably. Speech usually refers to the pronunciation of words (articulation), the easy flow of speech (fluency vs. stuttering), and the quality of the sound of one's voice (normal sounding vs. hoarse, harsh, or unusual in pitch or volume). Speaking requires us to translate our thoughts into sound sequences that are understood by others. The thoughts and the sentences to express them is language; the actual sounds are speech.

The act of speaking, for which your baby is preparing right from birth, is really quite remarkable. During speech, the brain signals the muscles of the lips, jaw, and vocal cords to move at an 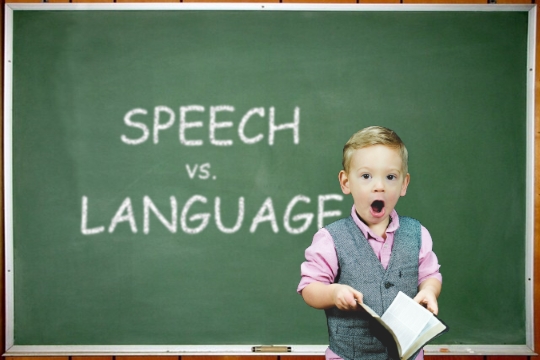 extraordinarily quick pace – at about eight sounds (phonemes) per second. That's eight distinct sounds in one second! Think about that the next time you speak. In fact, say something out loud right now. Say your own name and be conscious of what your lips, tongue, teeth, jaw, and vocal cords are doing. The sounds have to be in the right sequence, they have to be the appropriate sounds for the words in your language, and your vocal cords have to vibrate for some of the sounds, but not for others. They also have to expand and contract to give you different intonations within your sentences. And if you're saying more than a few words, your lungs have to take a small breath at exactly the right time. It's truly an incredible feat. Now think about what it takes to have a conversation!

So speech takes incredible coordination. But how do you know what to say? That's where language comes in.

Yes, you know that language has to do with talking, but it is much more than that. It is the brain's ability to understand and express oral and written symbols (sounds and letters), and words and sentences, and to do so appropriately in a variety of situations. Language is speaking, listening, understanding, thinking, reading and writing. It is essentially most of what makes us human, gives us the ability to interact with each other, learn whatever we think is important, and achieve our goals and dreams.

Using language is a very complicated process, but most of us just take it for granted. We all learn to speak, read and write without much difficulty. And unless we have a language or learning problem, we don't think about it much until we try to learn a new language.

In fact, it is difficult for most of us even to imagine the complexities of language, and children learn this enormously intricate system largely without any instruction at all. But that doesn't mean parents and caregivers don't have to help it along. Doing everything you can to develop your child’s language from birth through infancy, into toddlerhood and beyond, is a priceless gift you will give to your child. You should understand, though, that you aren't really "teaching" your child language skills, you are providing him with a perfect environment for learning. It is much too complicated a system for us ever to be able to teach. Think about this: No one actually "taught" you to speak. They couldn’t have. So how did you learn – and what did you learn?

First let's look at what language really is.


So how do babies begin on their path of using speech and language? It really begins at birth – and possibly even before that. We know that infants begin practicing speech and language right from the start, so the first year is crucial in this development. They begin by listening and by producing sounds with the parts of their mouths used for sucking, eating and fussing. Babies make all kinds of sounds, and sounds begin with breathing. So having good lung power is important. Sometimes people joke about a baby who cries loudly as having great lungs; but, in fact, crying is a very important part of speech development. The way a baby cries or giggles is the beginning of her use of language for communication.

Babies don't begin to use words (language) until after a year of age, but they are preparing for this and taking it all in right from the start. At less than a year babies imitate speech sounds and syllables; they communicate with body language; they understand almost 50 words; they can follow simple oral directions. Baby first practices speech in order to be able to talk to you when he acquires language.

So how will you know if your baby is on target with her speech and/or language learning? Many parents, even parents who have had more than one child, don't really know what children's language is supposed to sound like. Parents have many questions about speech and language: "Should I be able to understand everything my 4-year-old is saying?" "Why does he keep saying, 'Him go to the store'?" "I think my toddler just hears what she wants to hear." "Is there anything wrong with calling water 'wawa'?"

The best way to determine whether your child is on the right track is by really understanding each stage of speech and language development, and by watching, listening, talking and playing with your child every day as you observe this miracle. Watch and listen to both speech and language – your child's use of sounds, words and sentences, and his understanding of what you say. Listen carefully and watch for understanding, and you will be amazed at the work your little one is putting into being able to use speech to communicate through language.