Let’s think about your child’s first words. Words are grouped by how they are used. Content words are those that carry the content, or meaning, in a sentence. Function words are those that function as part of our grammar, but carry little meaning. Which type do you think your child will learn first? Of course he will learn those words that carry the most meaning, the content words.

Content words are nouns, verbs, adjectives, adverbs and question words (who, what, when, where, why). They are the words spoken by young children who are just acquiring language: mama, dada, juice, milk, cookie, up. They are the words that carry the content, or the message, of the utterance. Language with only content words is called “telegraphic” speech because when we used to send telegrams, we would pay by the word. So only the content, or important, words would be used. 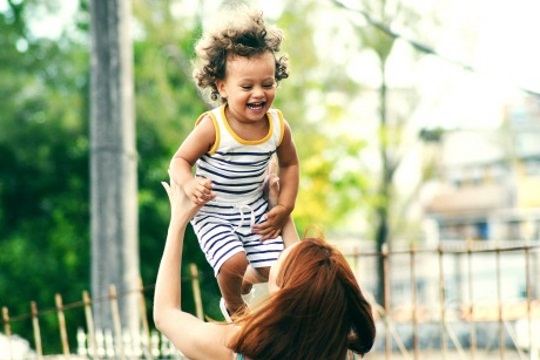 Function words are words such as articles, conjunctions, auxiliary verbs and prepositions. Their function is to add grammar to sentences. For example, the preposition of has 21 definitions in the Merriam-Webster Dictionary (online), and none has much real content; but we need “of” to make our sentences grammatical. Articles (the, a, an) also have no content; they let us know that a noun or noun phrase is next. Would a child’s first word ever be the? Of course not. It has no meaning, and it really isn’t needed for meaning.

When baby is learning his first words, he is actually able to communicate with those words pretty well. Since he can only utter one word at a time, he has to express a whole thought with that one word. These utterances are called “holophrases” (whole phrases in one word) and are used to comment or to make a request. This is the precursor to sentence formulation. Your child might yell, “Ball!” when his ball rolls under the chair. Because of his prosody (volume and stress), you know he’s anxiously commanding you to do something – to get his ball out from under the chair – and that something has happened that is upsetting. Since prosody develops in the babbling stage, it makes sense that it now is used with words to make meaning and intent pretty clear. Now he’s really talking, and almost ready to begin speaking in sentences.

Then, after baby has a vocabulary of about 50 words, she begins to combine words into simple, 2-word utterances. Your child will have words that are important to her – nouns, verbs, and some others. For example, the word more is usually important to little ones because they often ask for more. This might become a word for other words to be attached to in 2-word utterances: more milk, more juice, more hug, more up. The words that are used with them are the new vocabulary words she is learning every day. Another favorite word might be little, and you might hear utterances such as little dog, little flower, and little bug.

Since these 2-word utterances are not complete sentences, their meanings are determined by the context and the intonation the child uses, as in holophrases. For example, “Little ball?” spoken with the upward intonation of a question might mean, “Can Daddy get the little ball for me?” Of course this also gives you the opportunity to expand this utterance (“Do you want Daddy to get your little ball?”) and interact with your child. This is a very exciting time for baby because he is now able to communicate his desires more and more effectively, and he is really learning the power of language. Before long he will be putting together three or more words and speaking in sentences.

Toddlers quickly progress from one- to two-word utterances, and there is a normal range of time for this to happen. Toddlers will learn sentence types when they are ready, even when parents try to teach them more complex sentences. In fact, when parents and caregivers “correct” what a child has said, they correct his truthfulness, not his grammar.

This is what usually occurs:

Terri: Wittew (little) doggie.
Mom: (correcting the truthfulness of the sentence) No, Honey, that’s not a doggy, it’s a kitty.
Terri: (looks puzzled, but listening and trying to figure out the difference between a doggie and a kitty).
Mom: Why?

Mom probably wouldn’t respond by trying to fix Terri’s sentence like this:


It is as if the toddler doesn’t hear the correction at all and is upset because Mom obviously didn’t hear what she had to say. Correcting grammar at this age just frustrates a child, but expanding her sentences is a great way to lead a child toward using more complex language. In this example, Mom could have said, “Oh! You see a little gray kitty!”

Your child is constantly experimenting with language at this age, so he will be making lots of mistakes that actually make sense. You will hear him frequently overgeneralizing the word ending “ed” for past tense and “s” for pluralization, coming out with sentences like “Daddy comed out with me” and “I see my foots.” This demonstrates that your child’s brain is really working hard to figure this all out. Soon he will be saying, “Daddy came out with me” and “I see my feet,” but your child has to learn a rule before knowing where to apply it. It does take time to crack the grammar code. It’s a really exciting process, and surprisingly fast-paced, once the sentences begin!